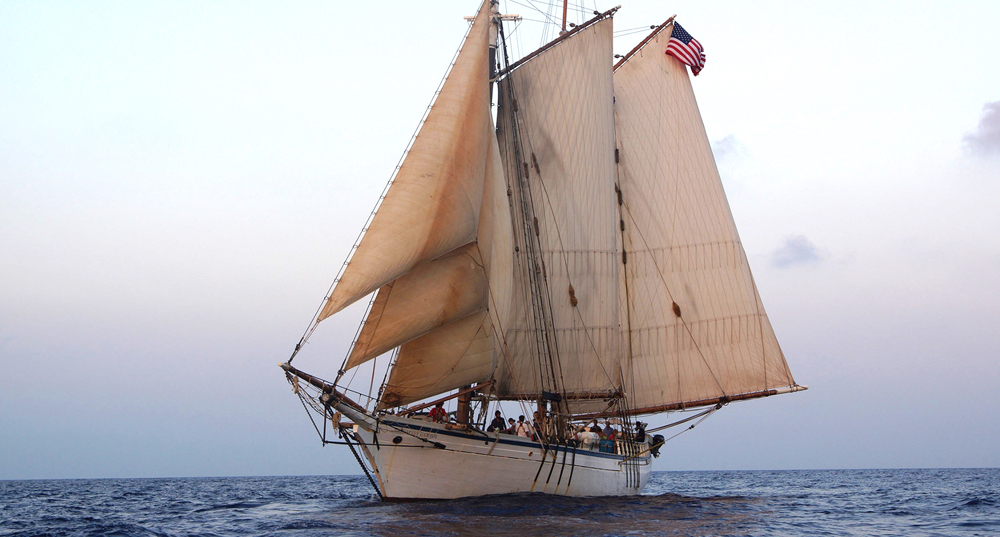 At one time almost every harbor on the coast of Maine was filled with schooners. Some were used for fishing, others for the coastal trades, and some even went deep-water sailing to parts all over the world. Following World War I, the number of schooners decreased dramatically. Today there are no schooners sailing commercially as they have been replaced by the tractor trailers. The only remaining survivors of that era can be seen at Bar Harbor, Camden, Rockland and Portland. It has been a long time since one underwent a major refit, but that is what happened to HARVEY GAMAGE at Portland Yacht Service in Portland for the past 14 months. Now she is ready to make a historic voyage to Cuba.

Heading the project is Greg Belanger, former Executive Director of Ocean Classrooms. He explained, “I came to Portland Yacht Services and met with Phin (Sprague) in hopes that Ocean Classrooms could relocate to Portland. We had been in Boothbay and then moved to Damariscotta. What I was trying to do was to align ourselves with a shipyard. When I started working there I did an assessment of the vessels (schooners HARVEY GAMAGE, SPIRIT OF MASSACHUSETTS and WESTWARD) and all three of them needed repairs. We made a decision that Ocean Classrooms couldn’t go on any further in its current configuration and that the three vessels needed to be sold. One of them was sold, SPIRIT OF MASSACHUSETTS, and the other two were sold here. The goal was to put them back to service. It was a hard decision to decide which of the vessels because each of them needed extensive repairs.

The HARVEY GAMAGE was built by Harvey Gamage, South Bristol; we thought a Maine vessel because we were basing the operation in Maine so let’s keep the Maine schooner. We knew it was going to take some extensive work to get up to speed. We were going to simply deploy the GAMAGE, contract it out to a similar kind of entity, doing educational programming, but that didn’t work. The nonprofit that was forming around that concept was unable to raise enough money. So Phin and I stepped back and took a look at what to do next. We decided to continue to renovate the vessel, but let’s develop a business model where we provide a maritime platform. We provide the vessel as a platform, and that platform is as in as good a shape as possible, crewed professionally and we in this office focus on the marine operations. We can provide a series of options for the client as opposed to the more traditional semester at sea approach. You have to maintain a marketing person, a program development person, and you have to have a fairly sophisticated accounting system. Basically what you are doing is you are running a small private school and a schooner. That is what the struggle is because the schooners have hard time generating enough income to carry the overhead of running a small school simultaneously.

We looked at that model and said let’s focus on running the boat. We will start by renovating that platform. There are a lot of boats that are for charter so you have to develop a special offering and that begins with geography. You have got summers in Maine, and maybe up into Nova Scotia with the HARVEY GAMAGE. The winter program is obviously going to be the Caribbean. I already had some experience in Cuba and I have a tremendous interest in what is happening there. That process is underway, but that transformation is not complete. So we will be operating in sort of this period of time where there is still an embargo in place for example there is still extensive licensing required especially for a ship to stay there for the duration we are hoping to. We decided that it was still worth doing that because it was a great new way for the GAMAGE coming out of this year-long 14 month yard period. She looks as good as she did when she was new.

Greg continued, “If you are going to charter the boat for this purpose you want to make sure that the fundamentals of the boat are sound. The rebuild included more than 50 planks. It included using treenails instead of the old nails. It included making all kinds of new design changes. If you go on board you will see in the amidships area there are all new bunks. There are a lot of innovations as well as a respect for tradition. We rebuilt the rudder from scratch and with the assistance of the naval architects redesign the rudder so it will be a little more efficient. So the boat is all new from basically the deck break forward. Up forward, the boat had always leaked so we rebuilt the bow. I am happy to say in the sea trials and our COI it is bone dry. In short the boat is in terrific shape and ready for another five years.”

With work on the vessel almost complete attention is now focusing on getting ready for the sail to Cuba. “You can sail into Cuba now under the licensing regiment,” said Greg. “We have met with the State Department and other agencies, like the Office of Foreign Asset Control, which controls the funding, and the Treasury Department. Now it is a question of what we will be able to do in Cuba. We still have to get final approval because we are asking for some things that are currently not being done. Normally you stay no more than two months and sail between a couple of ports before clearing back into Key West. What we are working on is a project to essentially be in Cuba waters for four months. We need to work with the Cuban people in the various ports and repeat our visits. We need to understand the attractions of the place, because our goal is to make Cuba and the port of Cienfuegos our operations center. Our proposal is more complex as we are not going to be recruiting students in the United States and sailing them to Cuba. There are already a lot of study abroad programs in Cuba. We thought instead of us trying to bring American students there when there are so many American students already coming into Cuba we will offer them a field trip option.”