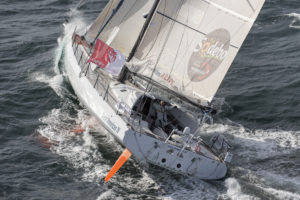 Great American 4, skippered by Rich Wilson is tied up on the pontoons is Les Sables d’Olonne, France along with the other 28 boats competing in the Vendee Globe, which starts November 5. GA4 is the only American entry in the fleet of 29 boats. The Vendee Globe is a non-stop race around the world, without assistance that takes place every 4 years. The VG is the hardest and most famous sailing race in the world. Nicknamed the Everest of the Seas.

Wilson, who competed in the 2008 edition of the race onboard GA3 came in 9th place of 11 finishers out of 30 starters. Great American 3 was also refit at MYC.

For the 2016 edition, Wilson purchased a new Open 60 in France and sailed the boat across the Atlantic to MYC for the critical refit and preparation necessary for the 2016 race. This boat, named Great American 4 is a much newer, more powerful and more technologically advanced Open 60 than Wilsons previous boat.

The entire crew at MYC wishes Rich the best of luck and we will all be following the race.