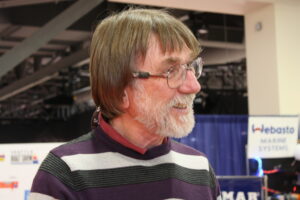 For over thirty years Nigel has literally “written the book” on marine electrical systems and his lectures on such are among the best attended at the world’s boat shows. Additionally, Nigel has played a leading role in adapting hybrid technologies to boat propulsion and electrical systems, culminating in the Integrel generator replacement technology (www.IntegrelMarine.com), winner of several prestigious marine awards in 2018. OPE has signed up as a distributor of the Integrel system.

Nigel comments: “For some time now I have considered Bruce Schwab’s Ocean Planet Energy (OPE) to be the leading recreational marine energy systems company in North America. I have watched OPE push forward the development of advanced high-output alternators and regulators, play a significant role in securing improvements in both lead-acid and lithium-ion batteries, and bring to market a new generation of highly-efficient semi-flexible solar panels. OPE is a company with a ton of practical experience and hard-earned knowledge, an energetic leadership, and numerous ideas for improving boat energy systems.

It is my pleasure to join forces with OPE to do what I can to continue to advance the development and availability of marine energy systems that are suitable for the ‘house’ energy needs of a broad range of boatowners. A key element of my role will be a constant search for technical advances that will enable OPE to offer the absolute best that is available with existing and emerging technologies.”

From Bruce Schwab: “Our Team at OceanPlanet Energy is immensely proud to have Nigel Calder join us. He has been an inspirational figure and enormous influence for all of the marine industry, and has helped to make marine systems understandable for countless boaters and cruisers. His textbooks are virtually required equipment on most cruising yachts going to sea. Nigel will be a huge benefit to the OceanPlanet Energy team in its continuing quest to deliver to boatowners the most efficient and robust marine energy systems with minimized fossil fuel consumption.”