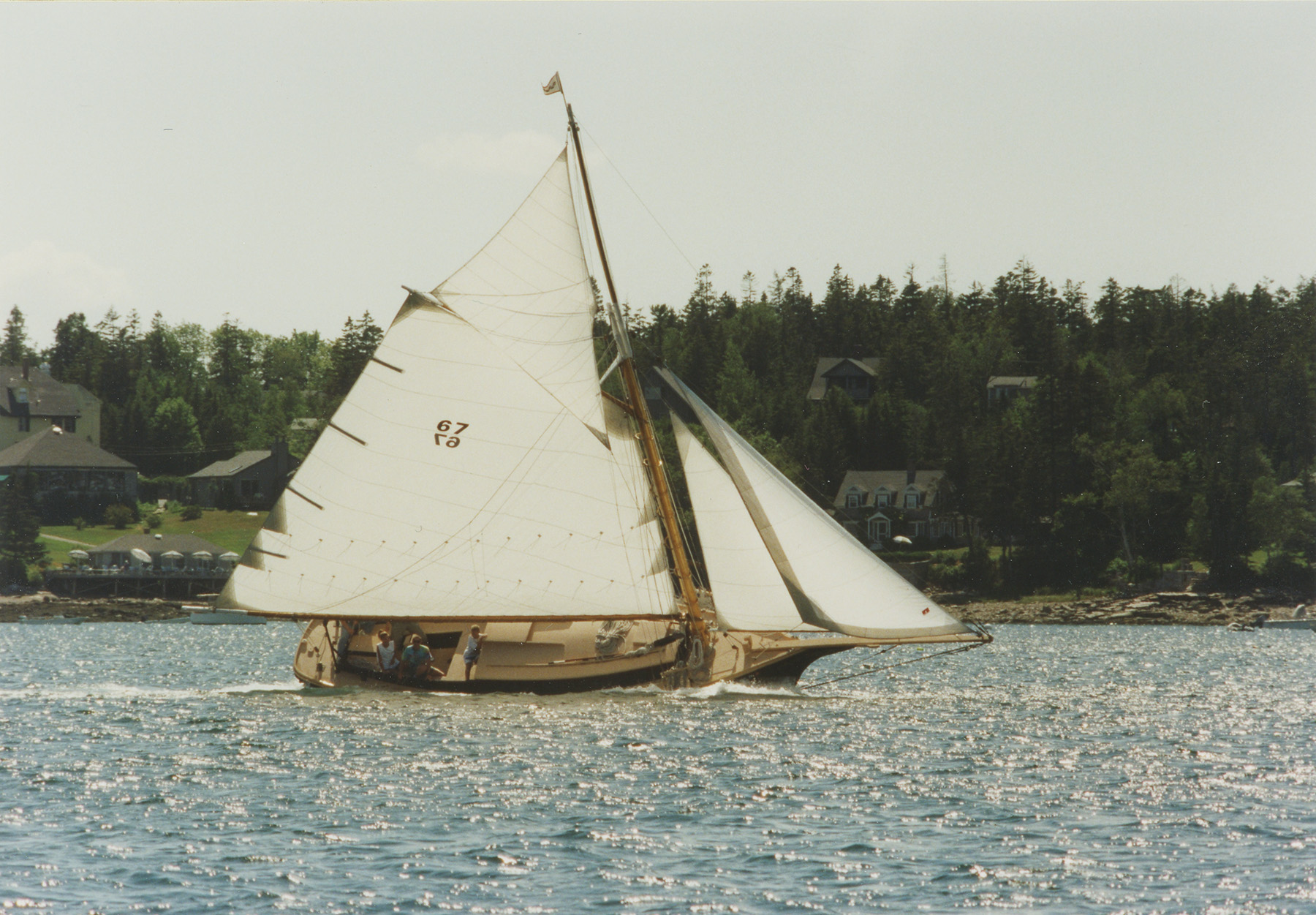 It is with a very, very heavy heart that we learned of the passing of noted boatbuilder and maritime historian Ralph Stanley of Southwest Harbor at the age of 92 on 7 December 2021.

Ralph grew up in Southwest Harbor. His father was a lobsterman and did some ground trawling. He also worked for a summer family in Northeast Harbor.

So why did Ralph not become a commercial fisherman? He said, “I was not very strong that way. I was sick a lot when I was a kid. I had pneumonia and when I was 24 years old, I had tuberculosis. I was operated on for that and have been fine ever since. But by that time, I was into the boatbuilding.”

Ralph got into the boatbuilding business when he wanted a boat for himself. He explained, “I got out of school and I had always wanted to build a boat. I wanted one for myself and the only way I could see to get one was to build it. I worked one summer and got enough to buy some materials and got the boat planked up and the next summer worked again and made enough to put a down payment on an engine and get enough materials to finish the boat. I got it done and that is when I figured I would never tackle another one. I was some glad to get it done.”

A couple of months later Ralph was asked to build another boat, this time for a customer, and he could not wait to get started. It was actually a pleasure boat but built in the lobster boat style.

Ralph predominately learned boatbuilding on his own. When he was a child, he would roam the boat yards of Southwest Harbor and there he leaned about boat construction. He used to go to Southwest Boat, Ronald Rich’s, Raymond Bunker’s, and over to Bernard to Bob and Cliff Rich’s shop just watch them. When he started to build his own boat and would get stuck on something he would go to one of the other builders and see how they had done it.

Since 1951, Ralph built one or two boats a winter up behind his father’s house on Main Street in an old paint shop which had belonged to his grandfather. Ralph then moved to the Clark Point Road and erected a storage building in 1971. The next year, he built the building shop.

The early 60s saw Ralph begin building sailboats with the 33-foot Friendship Sloop Hieronymus. He said, “One of the people my father worked for back during the war chartered an old Friendship Sloop. He remembered the Friendship Sloop and wanted one built. So, when he got ready, I built it for him.”

Since he built the first Friendship Sloop Ralph quickly became an authority on them. He has built a number of new ones and has rebuilt several.

When Jarvis Newman got the Venture, he was hoping to sail her but she leaked so badly he had to haul her up. Jarvis hoped he could get Raymond Bunker, who did not have any boats to build that winter, to help him rebuild her. Ralph explained, “He got discouraged with it and at one point he was going to burn it up. Along came somebody and they wanted to buy it. They hired him to restore it. So, he thought he could get Bunker to do that, but Bunker chewed on his pipe a little bit and said, “God, I can’t work on that thing.” So that night Jarvis was on my doorstep asking me to work on it. As it happened, I did not have a boat to build and I told him I would come down and start it but if I got a boat to build, I would have to stop. It was about the first of November and we worked for two months on it and got the hull restored up to the point of just working on the deck.”

In the two months times the two had replaced the keel, frames, planking and decked her over. In 1972, Jarvis got the Dictator and he wanted Stanley to help rebuild her over at his shop, which he did.

After he built the building shed on the Clark Point Road Ralph rebuilt the Amity for Russel Wiggins. After that he rebuilt the Morningstar and then was going to rebuild the Amos Swan, but after a closer look they found that there was nothing to save. So, they just sawed her up and built a new boat.

When looking back on some of the old-time builders Ralph reflected on some of his favorites. He said, “Raymond Bunker, I always liked his boat. Even the models that Chester Clement, who built at Southwest Boat until 1936 or 37. I was never in the shop when they were building, but I have seen a lot of his boats and they made quite an impression. They always had a good sheer, a good flare to the bow and a fairly good camber to the stern. Bunker always had a good sheer and they were a good going boat and the planks were always good and laid in fair, no hard bunches. I think some of them tended to be a little wet but they were good going boats. I also liked Bob and Cliff Rich’s boats.”

When asked about fiberglass boat, Ralph commented, saying, “When I build a boat, I can always see things in that boat I would change on the next one. If I was building a fiberglass boat, I would have to make a mould and every boat would have to be the same. I would lose interest in building that second boat. Putting that fault back in the boat would just turn me off”.

“However, I think fiberglass has got a place,” said Ralph. “I like to build a wooden hull and glass everything on top. The last boat we did the whole top was glassed and with a wooden boat that is where all the problems come from. If everything is glassed on top that is good insurance that it will never leak and rot on top.”

Ralph continued to build until he was joined by his son Richard, after Richard graduated from The Boat School in 1982. Together they would build wooden sail and power boats until the mid-1990s when Ralph retired. Ralph still worked in the shop from time to time, but his focus was now on the maritime history of Mount Desert Island. Even when he was building boats full-time, he was constantly doing research at the local libraries or learning from the old-timers what had happened there in the past. With all the research he did over the years he wrote numerous articles on Friendship Sloops and Mount Desert Island even publishing a book “The Stanley’s of Cranberry Isles and Other Colorful Characters” in 2020. Right up until his passing he was still working on various maritime history subjects.

Ralph was also involved with the Penobscot Marine Museum in Searsport. He had been a board member for years and was always vocal about the direction the Museum should be going. He was also their biggest draw when they held an event involving him, it was always standing room only as he talked on a variety of subjects.

As his career was winding down Ralph was given numerous awards, one very impressive one came from the National Heritage Fellowship. He was also honoured by the Friendship Sloop Society; The Boat School and the State of Maine announced a Ralph Stanley Day in 2004. That same year Craig S. Milner published the book, “Ralph Stanley, Tales of a Maine Boatbuilder.”

There is no question that Ralph was one of the most well-known boatbuilders of the Maine coast and it is extremely sad to have lost him. Over the years of publishing this paper I came to know Ralph quite well. He was a joy to sit down with and discuss maritime history or what we should be doing at the Museum. I, like many, many others, will certainly miss him.